So here’s a letter that I formed to post to my Friends and Family, who for the most part only speak USD (US DOLLAR)

I was writing to help you to get an understanding of Bitcoin so that You might see how it could help with Your Finances . The first step I recommend is for you to open a “Coinbase” wallet it’s free and you don’t have to make a deposit just open it and be sure to write down your password information. Now don’t think it strange to at some point to have to attach a bank account (its where you will withdraw your fund to when you convert them back to cash get used to verifying that you are who you say you are to the different exchanges. So here is our Coinbase Link
Go to Coinbase
I think that learning to speak another language either when you are young or the language is young is the easiest.
Once you have your Wallet you are ready to go after some serious Profits Or try your hand at penning a blog for profits on the “Steemit” platform You can even do it on their “Dime/ $7 lol.
Which denominations of currency does the Federal Reserve issue?
The Federal Reserve Board currently issues $1, $2, $5, $10, $20, $50, and $100 notes. The largest denomination Federal Reserve note ever issued for public circulation was the $10,000 note. 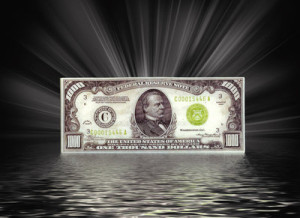 On that note; my brother , my sister I say “borrow vessels and not a few” or “open wallets” because no amount of “Bitcoin” can be held on a bank ledger not yet;.it needs a wallet attached to the “Block Chain”

A Video to add a new perspective

It’s Not Financial Advice It’s Infotainment
One of the first things you will need to grasp about crypto-currency is the fact that there are 7 to 8 places to thr right of the decimal point (they are called Statoshis ) this allows whosoever will to acquire very minute fractions of a particular digital currency or asset allowing those with the most meager of means to acquire a store it on the worlds largest digital ledger the “Block Chain” for pennies. With the new K-1 Phone using Voice over blockchain via android iso and satellite persons of even the most remote regions of the earth will be able to grow wealth.
I started out using the “Cryptonator” – “Service Tab” to “Converter” to quickly calculate my bitcoin transactions from BTC to Dollar then Euro then other Cryptos. After using it for years for “free” I felt kinda guilty so I opened up a wallet. Here’s

Be the first to start a conversation