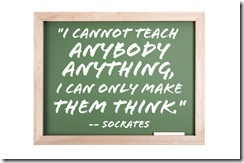 Socrates never professed to be a teacher .Neither did he profess to be wise.He acted as a student. He talked with all manner of people in the market place, asking them questions.

There was no such thing as free speech in those days. Independent thinkers were put to death. But Socrates by means of his question system, escaped being put to death until he was seventy-one.He was the first man who taught by asking questions He made the ancient Grecians think and they made the world think.

On the off-ramp of the Internet Highway to BrowserSt