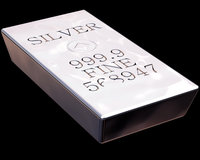 People for a Silver Hard Fork
Today August 24, 2017 I woke up to see silver trading at about $16.88 US and that’s when it hit me the Idea of a “Silver Hard Fork” . My idea of a SHF is Physical Silver going in a new direction from “Paper Silver when it comes to pricing.
I propose that the holders of some benchmark of say at least 50 but less than 500 ounces of silver have their silver audited and recorded on the block chain via some sort of “assaying house/metals exchange”
Once a sufficient amount of blocks are recorded The fork will Happen and those holding paper will start at or near the then spot price and physical silver will be allowed to find it’s price based on the marketcap of all recorded silver under the heading of a token/coin that exist for that sole purpose The (SHF) coin and other factors like total above ground silver the then estimated unregistered silver and whatever else bean counter geek need to calculate a good starting fork price and produce a daily “Forked Silver Price.